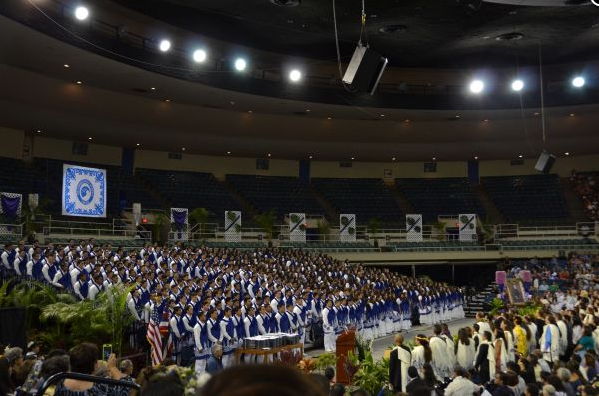 Last month, 444 seniors graduated in the 2016 Kamehameha Schools Kapalama class. And about 12 of them chose to remain seated during the “Star Spangled Banner” — only standing to join their classmates in song for “Hawai’i Pono’i.”

Their decision to not participate in the national anthem at commencement has sparked a heated debate about protest, Hawaiian sovereignty and discipline.

“It’s really about kanaka maoli finding themselves and being comfortable with who they are and not being afraid to just be kanaka,” said Ka’ipu Baker, 18, one of the graduates who didn’t stand for the anthem.

But Kamehameha Schools’ administrators have described their act of protest “as surprising and unexpected as it was unacceptable.”

A letter from interim Po’okula Debbie Lindsey to faculty and staff said the incident “created a noticeable disturbance to the commencement exercises” and “the ceremony was blemished by the poor choice of a few.”

The letter continues: “The behavior of that small group of students was disrespectful to our school and our country. It was particularly unfortunate that this occurred over Memorial Day weekend, knowing that thousands of KS Kapalama family members, faculty, staff and alumni have served our country’s military to defend and uphold the freedoms we enjoy today.”

As of Wednesday, the students haven’t been formally disciplined.

Kamehameha Schools alumni are divided about both the protest and reaction from officials.

“I feel like any place is the right place to remind people that Hawaii is Hawaii and that we are an occupied country,” said Jamaica Osorio, a 2008 Kamehameha Schools graduate.

“What I liked about their statement is that they weren’t disruptive. They didn’t say no one should sing this. They didn’t start yelling. They didn’t start waving their hands. They just quietly sat down and said we’re not going to participate. To call it a disruption or a blemish, to me, completely misses what they were trying to do, which is to say as individuals and as a small collective — we don’t have to do this, ’cause we’re Hawaiians. We know who we are.”

Those who have served say they fought specifically to protect these students’ rights to sit.

“When you’re in war. It’s scary. It’s not fun, but you do it for the person next to you and you do it for the idea of that freedom that we have and we can’t take that for granted. It would’ve been nice for them to stand for the guys we lost,” said 1998 Kamehameha Schools graduate Makani Christensen.

“It’s fine that they did that but just remember and keep in mind that we have individuals that paid the ultimate sacrifice to have those freedoms to do that,” Christensen said, pointing to Kamehameha School’s 1995 graduate Army 1st Lt. Nainoa Hoe who died during Operation Iraqi Freedom.

Cullen Slavens, 18, is one of the students who chose to remain seated at commencement. His father is a combat veteran who served for 21 years.

Baker agrees, saying their decision not to stand was not intended as a lack of appreciation for U.S. service members.

“We give them all the praise and honor, but really it’s about the system that is America and what they’ve done to Hawai’i. Look at it not as a sign of disrespect to them, but more as a respect to our kupuna because we wouldn’t disrespect our kupuna by standing for the very song that took away their land and all their mana,” said Baker.

In the letter, Lindsey says that, “To be clear, we have no issue with our students standing up for what they believe. In fact, we teach and encourage that. But when they are in Pauahi’s home of learning — and commencement is very much a part of her hale – our expectation is that our students will exemplify respect, honor and pride.”

Slavens and Baker, among the students who remained seated, say they were acting with respect and pride for the Kingdom of Hawai’i.