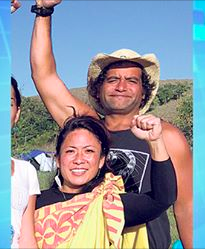 Some Native Hawaiians have joined thousands of American Indians in protesting the development of the controversial Dakota Access Pipeline.

Dr. Kalamaoka‘aina Niheu, who practices family medicine on Oahu, said she arrived in North Dakota earlier this month and is at the encampment of protesters to help provide health care. “This is my particular contribution,” she said.

Protesters have drawn the support of celebrities and politicians alike, including U.S. Sen. Bernie Sanders.

Niheu said the protesters have developed an extraordinary health network to support the protest.

Niheu said the native tribes from this country and elsewhere who have gathered to support the protest realize they’re facing similar problems.

“They are here to make a stand for their place and their homes,” she said. “It’s unprecedented. This is tremendous. It’s historical.”

She said the protest has been nonviolent and there have been about 60 arrests since April.

“People have been physically blocking construction,” she said.

American Indians, including the Standing Rock Sioux tribe in North Dakota, have opposed the development of the pipeline through tribal lands, saying it threatens water resources and would desecrate burial grounds.

Michael Kyser Jr. said he and some of the others in North Dakota were among the protesters atop Hawaii island’s Mauna Kea opposing the development of the Thirty Meter Telescope. Some American Indians now protesting in North Dakota traveled to Hawaii to support the TMT opponents, he said.

Temperatures have been in the 60s during the day and in the 40s at night and are expected to become colder as winter approaches.

Kyser, who has been at the encampment since Aug. 20, said he’s ready. “I’ve got my winter gear here,” he said.

Construction for now has been halted 20 miles on either side of the Missouri River but is continuing elsewhere near Bismarck, N.D., where protesters are getting arrested, Kyser said.

The federal review stalling construction will likely be completed within weeks.

Justice Department attorney James Gette indicated the possible timing of the review at a Friday hearing in a federal court in Washington. Work on the 1,172-mile pipeline continues to be stalled after the Obama administration said it wouldn’t authorize construction on a portion of federal land near Lake Oahe in North and South Dakota until further review.