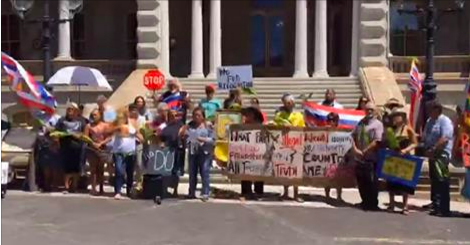 After the Department of the Interior (DOI) announced a new administrative procedure Friday that would allow a unified Native Hawaiian government — if one is established in the future — to enter into a formal government-to-government relationship with the United States, some Native Hawaiian sovereignty activists spoke out in protest, arguing that Native Hawaiians are not a tribe but a sovereign nation and that the rule does not address the real issue — that the U.S. helped facilitate the illegal overthrow of the Kingdom of Hawaii in 1893 and continues to illegally occupy Hawaii.

“In some ways it is monumental that after 123 years of systemic oppression and policies that attempted to sever our ancestral connections to ʻāina (ancestral lands and resources), illegitimize our language and culture, and erase the national history of a sovereign and independent state — that the Obama administration is the first since President Grover Cleveland to explore the restoration of Hawaiian governance,” Kamanamaikalani Beamer, associate professor at the University of Hawai’i Mānoa Hawai’inuiākea School of Hawaiian Knowledge and the Richardson School of Law Ka Huli Ao Center for Excellence in Native Hawaiian Law, told NBC News.

“In reality, many Hawaiians feel this development is less about benevolence and the beginning of good faith negotiations and more about the continued seizure of our national lands and resources and ignoring our claims under international law at a time when our national consciousness is reawakening and the politics of aloha ʻāina (love for land and natural resources) are beginning to influence and take root across our island planet,” Beamer continued.

Protests were organized on the islands of Oahu, Hawaii, Maui, and Kauai, according to Protest Na’i Aupuni.

At a protest Friday in front of Iolani Palace in Honolulu on the island of Oahu, Healani Sonoda-Pale of Protest Na’i Aupuni challenged the DOI’s claim to have listened to Native Hawaiians during its public hearings.

“Two years ago, when the Office of Hawaiian Affairs CEO Kamana’opono Crabbe [sent his] May 5, 2014 letter to Secretary of State John Kerry, in it, he essentially questioned the legitimacy of U.S. jurisdiction in Hawaii and he requested proof of how the Hawaiian Kingdom was legally annexed to the United States,” Sonoda-Pale said at the protest. “Within two months of Crabbe’s letter, hearings on five islands went on for two weeks. Thousands of Hawaiians came out, but only hundreds were able to testify. Ninety-five percent of Hawaiians who spoke out were opposed to any notion of federal recognition or state and federal interference in our right to self-determination.”

“We are not going to be defeated,” Professor Williamson Chang of the University of Hawaii Richardson School of Law said at Iolani Palace. “There have been many many deceits; there have been many many coersions. There have been Bayonet Constitutions. This is the second Bayonet Constitution. We survived the first, we will survive the second. Because this is so wrong. It is so against the truth. And the truth is that annexation — which we discovered in 2014 which led to the letter by Dr. Crabbe — that the United States, by its own laws in this very book, the laws of the State of Hawaii, has admitted by its own laws that it has never taken Hawaii.”

In 1993, President Bill Clinton signed the Apology Resolution, publicly acknowledging and apologizing for the United States’ involvement in the illegal overthrow of Queen Liliuokalani and the Kingdom of Hawaii in 1893, admitting that the United States violated Native Hawaiians’ right to self-determination and international law. Some Native Hawaiians believe that the logical resolution is the full restoration of the Kingdom of Hawaii as a sovereign nation, rather than having the U.S. government decide the terms.

“The United States took a stable government, destabilized it, and then has the nerve today to say, ‘We will make a deal with you, and the deal is you agree to become our native people and we will negotiate some kind of settlement that will make life a little bit better for you,'” Professor Jonathan Kay Kamakawiwoʻole Osorio of thge University of Hawaii Kamakakūokalani Center for Hawaiian Studies said at Iolani Palace. “The very very worst part of all of this is that what the U.S. has done through the DOI, what the state has done through Na’i Aupuni, those things have really actually acted to divide a people who were moving, who have been moving, towards a legal, rational, and reasonable solution to the hewa that the United States committed more than a hundred years ago.”

“We do not agree because none of this has been good for us as a people,” Osorio continued. “Not as a people, not as a nation, and we respectfully ask the United States to move out of this and the state of Hawaii to stop the continual interferences in our right to rebuild our nation. We ask this respectfully. And we are going to continue whether they do this or not. We continue to build towards the day when we will be an independent nation again.”