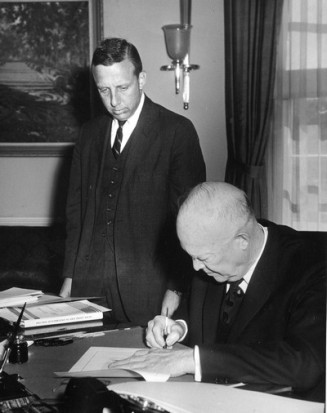 “The citizens of Hawaii will soon decide whether their Islands shall become our fiftieth State. In so doing, they will demonstrate anew to the world the vitality of the principles of freedom and self-determination – the principles upon which this Nation was founded.”

President Eisenhower’s use of the words “self-determination” was a legal statement, used to sway upcoming opinion at the United Nations to remove Hawaiʻi from a list of countries to decolonize.   Hawaiʻi was on a UN  list of countries to decolonize because the  U.S. placed it there.   After President Grover Cleveland and the U.S.  Senate determined the U.S. illegally overthrew the legal constitutional government of Hawaiʻi, the U.S.  Senate refused to ratify the treaty of Annexation negotiated with  Sanford Dole.  Since there is no ratified Treaty of Annexation between America and the Hawaiian Kingdom,  America correctly placed Hawaiʻi on the United Nation list.

The U.S. claim decedents of the Hawaiian Kingdom fulfilled “self-determination” and subsequent removal of Hawaiʻi from the United Nations’ list, was a bold and illegal move.  It was illegal as it violated at least 3 provisions of UN resolutions for self determination and decolonization.

The direct result of the illegal statehood vote, is now, the State’s push to speed up “self-determination” by funding the creation of a Native American Tribe through the “Nation Building” efforts of Kau Inoa, Kanaʻiolowalu, Naʻi Aupuni, and their newly created  Aloha Lāhui.

Why does the State need to create Na’i Aupuni /Aloha Lāhui if the statehood vote was a legal form of self-determination for Hawaiians“?   The answer is simple.   The statehood vote was not legal.    Just as the State creating and funding of Naʻi Aupuni’s constitution is a further illegal act.  Finally, the creation of Aloha Lāhui to create the appearance of separation from the State is simply further attempts by America to create a tribe with which can settle land rights.  Without a Treaty of Annexation,  the U.S.  has no land rights in Hawaiʻi.