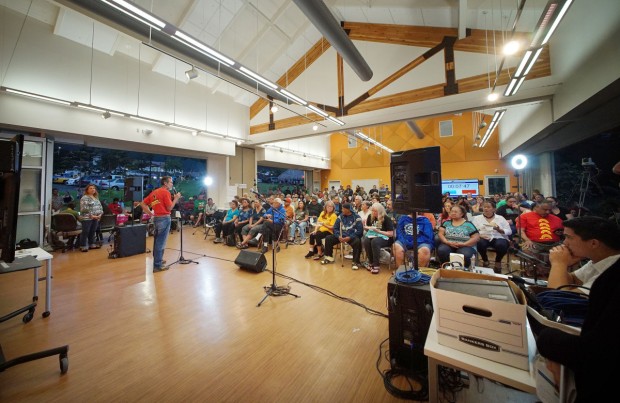 Walter Ritte beamed as he flashed a shaka to the kupuna in the front row of Hale A‘o Hawaiian Studies at Windward Community College in Kaneohe.

Noting the full parking lot outside and the overflow crowd at the aha, or convention, Ritte said, “Wow … The call has been answered.”

“The call” is for a path toward self-governance, one that returns to Hawaiians their independent nation, which was taken from them more than 100 years ago. It comes from a new group called Aha Aloha Aina 2016,

The Thursday night event attracted 350 people, according to one of the speakers, to what was billed as “a historic gathering of Hawaiian sovereignty leaders.” In addition to Ritte, speakers included Andre Perez and Healani Sonoda-Pale. The primary message was a call for unity.

As Ritte explained, many Hawaiians are confused about another aha taking place this month, the one held by Nai Aupuni. Its website says it exists “solely to help establish a path for Hawaiian self-determination. It will do this through inclusion of as many Hawaiians as possible and in a transparent way.”

But that’s not the way Aha Aloha Aina sees things.

Ritte recalled that when he graduated from Kamehameha Schools in 1963, the word “overthrow” — as in the 1893 overthrow of the Hawaiian Kingdom by business interests with the support of the United States — was never spoken.

He called his schooling a form of “brainwashing” and “colonization” that kept Hawaiians from understanding their true history. And he suggested that Nai Aupuni was continuing that pattern. Ritte, a longtime activist from Molokai, initially applied to run for a delegate position at the Nai Aupuni aha, but later opted out. He questioned the agenda and independence of Nai Aupuni, which is supported by grant money from the Office of Hawaiian Affairsthrough the nonprofit Akamai Foundation.

Thursday’s gathering was the other aha — or the “real aha,” as convener Kalama Niheu put it, to build lahui — a nation.

Another speaker, Healani Sonoda-Pale, was more blunt: Nai Aupuni is “a state-sponsored process to create a puppet Hawaiian government” that will lead to a global settlement on Hawaiian lands. The settlement, she said, would result in the selling off of the lands for development, never to be returned to Hawaiians.

Formed in December 2014, Nai Aupuni says it is separate and independent from OHA and the state of Hawaii.

Critics have noted OHA is a quasi-state agency that receives ceded land revenue from the state, and that the creation of a registry of qualified Hawaiians was aided by the Hawaii Legislature’s Act 195 establishing a Native Hawaiian Roll Commission, or Kanaiolowalu. Nai Aupuni has also been subject to lawsuits by the Grassroot Institute of Hawaii, which sought to halt Nai Aupuni’s election of aha delegates last November, saying it was unconstitutional.

After several court rulings, Nai Aupuni decided to abandon the electoral process and invite all of the more than 200 candidates to participate in the aha. About 150 accepted.

The purpose of Aha Aloha Aina is to not only oppose Nai Aupuni but to also reject U.S. Department of the Interior efforts to federally recognize Hawaiians in a manner similar to other indigenous groups.

In place of that, it wants to reaffirm Native Hawaiian independence, unite Hawaiians and demonstrate that they have been active in nation-building for several hundred years — even after the overthrow.

Aha Aloha Aina hasn’t gone into specifics about how, after all the changes in the islands since the overthrow, it believes that independence for Native Hawaiians could be restored.

But it announced in early February that it would hold its own meetings this month on Native Hawaiian independence.

The meetings, which have already been held on Maui and in Hilo and Waimea on Hawaii Island, continue in Kona on Friday and Kau on Sunday. They are intended “to identify the very broad movement in the Hawaiian movement for Independence and educate the community on the various initiatives.”

Aha Aloha Aina dismisses the authenticity of Nai Aupuni ‘s aha, which it said in a statement is “attempting to claim that they represent the Kanaka Maoli community when it excludes 80 percent of our people.” The new group has already begun to attract attention, as when seven Hawaiians were arrested Monday trying to attend the closed-door meetings of Nai Aupuni. Both organizations have televised some of their proceedings on Olelo Community Media, and both have their own websites and logos.

Aha Aloha Aina says it has also produced two declarations: one reaffirming independence for Hawaiians, and another rejecting the Nai Aupuni aha.

Meanwhile, Nai Aupuni has stepped up its own public-relations campaign, sending out more than a dozen press releases this month detailing its activities. The releases are handled by two aha participants, Adrian Kamalii and Amy Kalili.

The press releases accentuate the positive. On Wednesday, for example, a release said that 116 Native Hawaiians had met in Maunawili, near Kailua, for “day 17 of this historic convening.”  The work included “continued markup” of potential governing documents.

Nai Aupuni downplayed the Aha Aloha Aina protest, saying in a press release the next day, “Despite a delayed start due to a large number of participants being unable to enter the venue on time – given demonstrations outside the gate to the property – the Aha continued work on drafting the governing document(s).  After the wehena (opening), a short discussion took place to have a statement from the demonstrators read on the floor.”

The Nai Aupuni missives do not indicate any tension among delegates at the aha, suggesting instead that it’s been nothing but progress.

Here’s an example from Monday: “The majority of participants met in plenary, shifting focus to post-Aha activities, identifying priorities, strategies, and partners for outreach and communication back to the larger Native Hawaiian community about the work accomplished and the next steps that need to be taken.”

But participants at the Aha Aloha Aina like Andre Perez are not likely to be persuaded. Over the past 15 years he fought the Akaka Bill in Congress that would have given Hawaiians federal recognition (“fed wreck,” as he called it).

Perez told the Thursday aha that Nai Aupuni was formed without the consent of Hawaiians. While there are many good people participating in Nai Aupuni, he said, the process leading to it has been “manipulated, controlled, politicized without our involvement.”